I’ve finally moved all of my money out of my old company pension plan. Moving it from AEGON who were charging 1% to look after my money to YouInvest at a marginal cost of around just 0.25%.

Despite the ravages of the markets this week, saving £7.5 on every £1000 invested is a marginal gain that all adds up.

In case you didn’t know, you can transfer out of your workplace pension as you are still paying in. Often the workplace pension is a combination of poor value for money (HIGH FEES!) and not invested the way you want it.

I had my money in one of AEGON’s funds that was basically a tracker but with hefty fees. It was heavily weighted to bonds – which I don’t need since I have a final salary pension from the first company which acts like a floor on my pension income requirements. 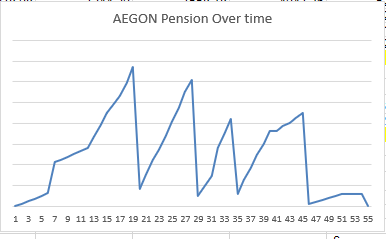 So, in the four and a half years since I started contributing, I’ve made 5 transfers out. This is the last one and the account is now closed.

The pension was useful from the company as it had salary sacrifice which really boosted earnings (you can see from the graph to the left that it took me about a year to work out that overpaying massively into the pension was a very good idea! (but I got there in the end.

Over the time I was at the company, I salted away so much of my salary that I ended up getting paid minimum wage after the pension! That put a bit of strain on our cash-flow situation but we got through it (in part by having non-pension savings/investments that we could call upon – just one of the benefits of being rich).

I paid in around £120,000 into my AEGON pension and the price of staying with them (ignoring any growth) is around £900 a year. Instead that money is in my SIPP, earning me money instead of AEGON.

Even better, the process of transferring your pension is very simple. Download a form from your new provider you are moving to, fill it in and send it to them. They do the rest and it’s normally totally free. Your existing provider can’t stop you (unless you are on a final salary or similar – in which case take advice) and in my experience they don’t even try to stop you.

Having your own SIPP means you make the decisions – so take your time to make the right decisions. I mainly personally use ETF trackers as a low cost, lower risk way to invest.

Getting rid of your company pension is also one less account to worry about and it’ll be the easiest money you’ll ever save.

*perhaps cheaper providers will come along in the future

VCTs for Financial Independence Part 3 – Making it Work for You!

How to get oil for just 6p a litre