Is everyone’s spending any of my business?

Merry Christmas one and all!

I hope that you had a good time and didn’t get into debt over it. Get loads of pressies – something to show-off – make yourself popular?

You make me sick!

Maybe you are bit like me but part of me has a hard time accepting that how other people spend their money is none of my business.

It’s their and they are free to spend it as they see fit.

But for me; If someone’s spending doesn’t match with my values or cheapness – it really annoys me that they could be so stupid as to waste their money on anything from spending too much on cars designer clothes, big tvs, fancy watches or houses (or should I say luxury designer crafted homes) and most of all fancy cars!

I’ll totally ignore the fact that we spend a lot on some things like ski trips, our very expensive nursery and wood burning stoves in our huge listed building house – so long as I can frugal-brag about saving money on cheapo coffee, flatscreen TVs + license and running an old banger.

Intellectually, I know that people should be free to do what they like with their money so long as it doesn’t harm others. There’s even a great fable of the bees which would give rise to the idea that “private vices lead to public virtues”.

The Prince the princess and the pervert

So, say I’m a jet-setting prince and I like to pay young (but legal in the UK) girls for massages and extra services (like polishing the crown jewels) might sound like something disgusting and horrible but the money given to the beneficiary can be used on things of public virtue like university fees, food and therapy.

So overall it brings goodness to life.

Maybe I’m diverging from the point – and I should add that I am not a fan of either that type of behaviour, the royalty or even pizza express. The point is that if people spend money – even on things that I don’t see the value in – that money is recycled into the economy and at a basic level is pays tax (VAT) and gives employment to people. The fact that the economy is somewhat addicted to credit and debt and reliant on consumer spending is even more reason to spend more money! These spendthrifts are actually economic patriots in the same way that savers like me (us?) are traitors!

BUT I still feel like telling other people how to spend their money!

I’m a hypocrite and I blame my parents!

As a traitor; I am pretty sure that this came from my parents and upbringing where ostentatious behaviour was frowned upon and gratuitous displays of wealth were considered vulgar. I’m grateful for the values my parents instilled in me.

Growing up, my family was not rich and my parents were raised to not think that frugal was a fad but just how you lived life. They were born around the end of WWII and avoid some of the worst boomer mentalities.

I grew up in a town which was (and still is) “economically disadvantaged” as you would say politely. Despite this, we always had what we needed and my parents were careful with money (because they had to be – let’s not turn a necessity into a virtue). It instilled a spirit of what some people call “poverty mindset” which has been hard to shake.

We now live in an abundant society where practically everything is disposable and comes with inbuilt obsolescence. A big part of money saving or being frugal is learning to say “NO!” 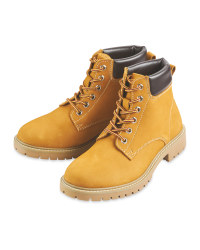 I never liked feeling poir when growing up. It hardened me up but it didn’t feel goid when relative to someone else I appeared poorer.

When I was maybe 12 or 13, one of my rich cousins asked to have an old pair of sand boots (just like you see).
My cousin was the sort of kid who had a wardrobe full of toys he’d been given and played with and broken. The sort of toys that I could only dream of owning and he’d smash them or lose interest. He also had decent clothes and no hand me downs or Primark rubbish – not 2 or 4 but the real McCoy  3 strip tracksuit bottoms. I knew that his family was better off than ours – not my fault but what can you do?

Sandboots I had were in great nick. I hardly ever wore them since I am the sort of person to wear one pair of shoes at a time and I couldn’t wear these school or to play football in. I don’t even think that I broke them in.

My cousin saw the boots and asked if he could have them. My mum thought that it was a great idea but I didn’t.

Anyway, I didn’t let him take my boots (which I never wore again probably) for the simple reason that I felt that he was richer than me and that even though I had not utility from them (and he would get some use) that it wasn’t right to take from the poor to give to the rich. Part of it was spite but part of it was feeling like poor old me shouldn’t be giving to my rich cousin.

By not letting him have the boots I could tell that I let me Mum down. It’s funny to think why I didn’t give them now – maybe it stems from a type of insecurity that is emboldened into despising the rich whilst also wanting to be rich. I feel the same way now about spoiled or privileged kids and kidults.

It’s none of my business

I’ve changed and I’ve not changed. I have a deep bitterness inside of me that’s not always active but isn’t far from the surface. When I see someone driving a £40,000 car, I just don’t get it – why waste all that money. BUT – IT’S NONE OF MY BUSINESS!

Do we owe others an interest in how they spend their money? It’s maybe a moral question since over-consumption is clearly bad for the world. That’s probably a case for questioning people’s behaviours. But there’s maybe not much difference between the impact of a Casio vs. a Rolex.

I’ve been criticised in the past for having lots of savings (being loaded) whilst at the same time having my old-style mobile phone laughed at. I didn’t think anyone else had a right to saw that I should go an buy a better phone just because they thought so. It’s complicated.

Last week, I walked passed a Food Bank and watched as a fashionably attired man jumped out of the passenger  seat to run in and get a food parcel. The 2019 plate car was left running idle on double yellow lines with the driver sat on her phone. The car cost more than both of ours, her phone looked more expensive than mine and they obviously have money to burn by leaving the car running idle and polluting the air for me and everyone else.

I knocked on the window and told the driver that she was running idle and she didn’t reply kindly. When I suggested that perhaps burning petrol was wasteful when she can’t even feed herself she still didn’t turn-off the engine. I’ll not make a great environmental campaigner or social reformer and maybe I’d just be better keeping my mouth shut.

If you spend all of your time moaning about how other people live their lives you probably aren’t living your own. How people spend their time or money, what they eat, what they read, how they dress, what music they listen to and whether or not they have started saving for a deposit/pension is none of your business.  And as someone else says – put on your own mask first before helping others.

There is maybe a realm of societal interest in what we do – “drugs are bad”, “gambling is going to lose you money” but those are very low barriers. The in-between bits are maybe none of our business and maybe I should stop worrying about others and just learn to ignore and focus on improving myself instead.

A Global view on work vs. income

It’s a dirty job, Dom, but somebody’s gotta do it

Reader Question: How Do I Find an Environmental Career? — Tread Lightly, Retire Early

We’re all going on a Mortgage Holiday

The Merits of a Paid-off Mortgage?