I read this article about Costa Coffee*. And it really made me sad that there are so many people forced to work in these shitty jobs and have to endure inhumane treatment at the hands of the franchise licensee. Stop the chains, drink independent coffee!

Basically, the coffee franchise model is being used to squeeze money out of users of their (seldom anything but) dirty outlets and squeeze the poor employees who are treated like shit. The owners/directors sound like sociopaths – like who would think that pilfering the staff tips to buy yourself gifts is on? I for one don’t think so.

I don’t think that the franchise model needs to be bad and I think that there’s a lot going for it. This blog post spells out a bit more. But when it comes to treating people like shit and making working conditions like something out of a depressing Dicken’s novel – then there is a big problem. Alongside zero-hour contracts and the gig-economy, part-time work at inconvenient hours for shit pay is not something I think makes the world a better place in 2019

The article does say that they are treated like shit and heavily penalised for say opening the store late – to the tune of £150. I’m just guessing that that’s about 20 hours of wages (these are probably minimum wage jobs after all – they’d like to be paid less but the pesky government gets in the way of the true price of human labour.

The list of rules and constraints is ridiculous as you can see below: 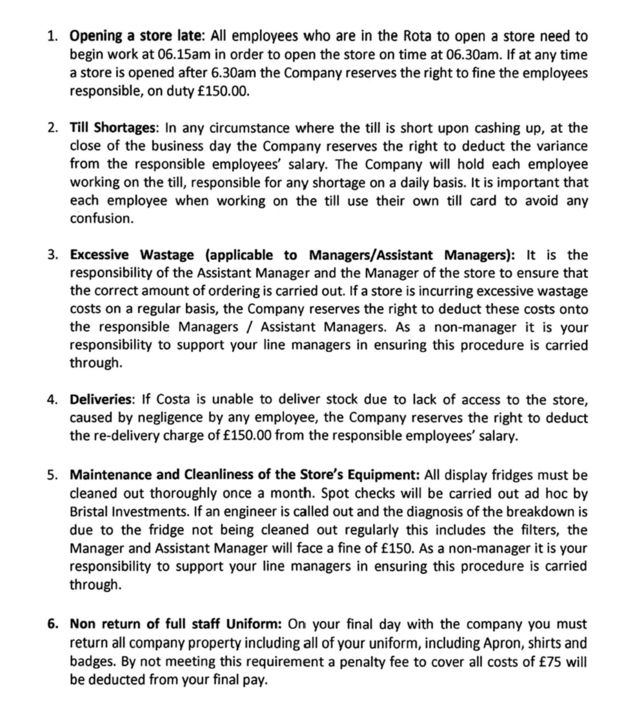 Often these jobs pay minimum wage or just a bit above. They are ideal for people who survive on in-work benefits (like tax credits) to make what is a non-living wage somehow liveable. The truth is that often these poor people are being exploited by the employers (even if they are “techincally freelance”) and the tax payer is picking up the slack and the employers/shareholders/directors are making serious money – like enough to buy a big boat with – sweat from the poor and brass from the middle.

There’s an issue around the minimum wage that is worth making – but David Cross says it better than me:

There’s nothing inherently evil about franchising. But it would seem to attract people who are evil – in the sense that the love of money is the root of all evil – and they feel that people are dispensable, replaceable and can be bullied into subservience.

These are all very troubling and maybe just the tip of the iceberg.

There is a thriving business in franchising. It can be a very good way to becoming rich and although hard work (and the seed money can be a lot!) it’s a relatively low risk, high reward  strategy. The marketing and business planning has all been done for you already and if you have the energy and attitude, you can become very successful.

Also people like chains – be it car washes, fast food restaurants, pre-school kids classes; they give you a comforting brand image and assurance of standards.

But when it comes to coffe; quite why we have trouble choosing and trusting a coffee shop is another question – as a devotee of black coffee, there seems to be a lot of marketing and psychology that goes into the design, build, operation, and presenting of what is essentially a machine that washes caffeine out of ground beans. But when coffee costs $3/kg and a double shot is maybe 20g, so your £2.50 large Americano is 5p beans and £2.45 other costs. What are you paying for is not the beans.

My observation with coffee shops is that the chains are not cheaper or nicer than smaller establishments. I personally like table service and I don’t like having to queue up and order like it’s a fast food restaurant. It’s your money and your choice but the big coffee chains seem to be ubiquitous and maybe independent coffee shops are suffering.In the mean time, more and more people are going to be getting jobs in coffee chains and treated poorly. Expected to work long hours for not much.

If you do go out for coffee, try going somewhere where the staff are treated right and the management don’t steal their tips!

*Personally I hate Costa Coffee more than any other coffee chain. I don’t know why, maybe the colour scheme, maybe the fact that they are always filthy, maybe the fact that at least Starbuck’s comes pre-selected by discerning Seattleites and Caffe Nero has the veneer of Italia and better coffee. Maybe it’s also a distinctly British brand and it’s main USP is that it’s just like everyone else and it’s ubiquitous!

Is everyone’s spending any of my business?

Merry Xmas one and all!