Following on from Part 1 and before Part 3 we find my Dad retired from work and largely listless. After almost 40 years he had earned a little time for rest and relaxation. What else are you supposed to do when you retire?

This part of my Dad’s story runs from roughly 2003-2005. This time was now 15 years ago and on the one hand, I remember a lot about what I was doing during these years and little of what my Dad was doing. Despite retirement being a major milestone in our family, I don’t remember anything major happening at this time. No new car, family cruise, loft extension, new kitchen, nothing at all in fact.

In those years I finished university got a job, accrued about £15,843 of student debt but kept enough cash free for a bit of spending and travelling. I didn’t enjoy the university I went to but I spent a semester on Erasmus and not only got better grades but a glimpse that life was indeed better than my provincial University would have made me believe.

I graduated with a first and got a good job (after a 4 month wait at home) in Scotland in the oil industry. Personally I would have preferred a job in Europe and not in the oil industry but in retrospect it was a good career path to take. In that time, I can say that things went to my grand plan for myself.

In researching this piece, I tried to see if my Dad had emailed me anything in this time. He was always quite IT savvy and was an early adopter of many tech things. But I couldn’t find much from this time at all. These emails are windows to the past and store our memories (and bad spelling) forever – but offer only glimpses and no strong narrative.

From what I have read, after retiring at 60 my Dad pretty much did what he did before but didn’t spend 5 days a week working. He did get a few days here and there teaching. I always remember thinking that it was quite easy for him to pick up a day or a week here or then when I knew of other teachers (newly qualified) who were struggling to get work. He did go on a few holidays and travels and with a large extended family, he kept travelling a bit.

After I graduated University, I had a few months of waiting to start work at the company that promised to give me a job. It was not nice being in limbo and expecting that I’d be at any moment packing up and moving on with my life. For those 4 months, I didn’t do much. I read up a bit on things like like The Future of Money, was influenced by Richard Florida who was talking about the “Rise of the Creative Class”. Creativity was where it was at and you should want to live like those guys in Friends and not in some boring suburb. And I found a site called House Price Crash which I’ve been reading now for almost 15 years (and still waiting for the crash). 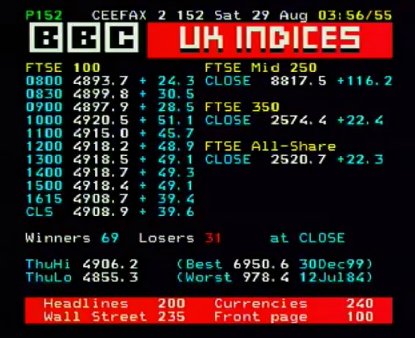 Having a bit of time on my hands was a luxury that I didn’t take full advantage of – past stretches at home involved me going to the gym & library most days but being purgatory meant I didn’t focus on the hear and now. I could see that my Dad was doing the same thing. Without the prospect of having to go to work or do anything in particular on any particular day, my Dad would wake up late and spend a lot of time watching the share price of his only share go up (or down) on Teletext. He was vegetating whilst at the same time I think my Mum was out working again and keeping busy.  I wasn’t a very motivating son and my Dad wasted his time and I wasted mine. Now that he’s gone I think that if I had that time again I would do or pay anything for it.

I was becoming concerned about my Dad’s lack of activities and I knew that he had to start with some interests/projects/activities. He still did badminton once a week and other things like that but there was a gaping whole in his life where work had once been.

The idea came to me when I was searching around the internet. There was a thing called the “University of the Third Age”, a terrible name that made me think of it being some sort of cross between and old folks bingo game and a hippy cult. It’s actually really good and an amazing resource for lifelong learning. If you are into your 3rd Age, give it a go!

In September/October 2005 I got a days work as an exam invigilator at the 11+ a school a few miles away. Easy money being an exam-type person and it’s maybe one advantage of having parents who are teachers. Anyway, on the way back from the exam, I dropped into the U3A local headquarters and inquired about the courses that they had. It turns out that they had courses that ran in semesters and my Dad has missed the start of the Autumn term. I took home the brochures and guide to my Dad and explained that there was loads to do – from art, local history, computers, languages and a whole lot more.

Maybe by telling him that he would have to wait 3 months before he could start was a catalyst for what happened next. The next day my Dad drove over to the U3A and pretty much just walked into a class – sat down and explained he’d be joining. I think that he even started teaching a class there a few weeks later when a teacher was sick (teachers make the worst students).

Importantly he chose to take a class in Spanish – a language that he didn’t know much of before although he had been on holiday (not beach) before. As a direct consequence of him taking the Spanish class he went on to complete the Camino de Santiago a few times in his life. That was something that he loved and looking back on it now, if my memory is correct and I helped him get out of his rut and get excited about life again, then I did something good.

We humans like to relax – take it easy but that can spiral out of control. The truism of “if you want something done, ask a busy person” stands in my opinion and I firmly believe that business is happiness. My Dad went a bit too extreme with out plans, goals and projects.

That’s what I’d like to replicate – keeping an active, fun and friendly lifestyle; finding a passion and seeking a life that is full of adventures and thrills. My Dad found that and I’ll talk more about that in Part 3.

The End of an Era

Blood on the Streets