Following on from part 1, no how with an old final-salary pension I’m now a millionaire but don’t live the millionaire lifestyle.

Over the years at the old company, I built the final salary pension.  It is (or was) a good pension and because it was so good, it gave me good reason to put up with shit jobs, shit bosses and shit work.  But it also gave me the confidence to leave when I did.  Knowing that I’d have a secure(ish) old-age was a real comfort to me.

No matter how messed up my investments get – no matter how bad things are – I’d always have the pension. It maybe led me down the path of riskier investments and some of those paid off and some didn’t.

The pension itself is worth just over £10k a year paid from 60, increases with RPI and if I die, the Lady will get two thirds.  I value it at just over £200,000 or 20 times the annual value now. This is the same valuation that the HMRC use when calculating final salary pension values.  Given my current life expectancy is 86, that means 26 years of pension or you could value it at about 26 times today’s value.  But the discounted cost now to the pension fund means they value it at much higher than 20.

The HMRC value these final salaries a bit differently, they say that the value is 20x the annual payment.  Get £20,000 a year then it’s worth £400,000.  This is used when calculating your lifetime allowance.  As rules of thumb go, 20 isn’t too bad.  It’s conservative, a nice round number and seems about right doesn’t it, that’s like 5% annuity?

Well, the truth is that 20x has major flaws.  It’s well known that to buy an annuity with the same protections of (my) final salary pension (rising with inflation, transferable upon death to spouse) it will cost you a lot more than 20x.  The best buy that I found has £100,000 paying only £2,428 a year for a 60 year old male, single, guaranteed for 5 years and rising with RPI.  At that price my pension is worth over £400,000.

It’s no surprise that annuity rates are low and with pension freedoms, annuities have fallen out of favour.  Up until the GFC you could expect maybe 6-7%, but with falling gilt yields that’s now much lower. 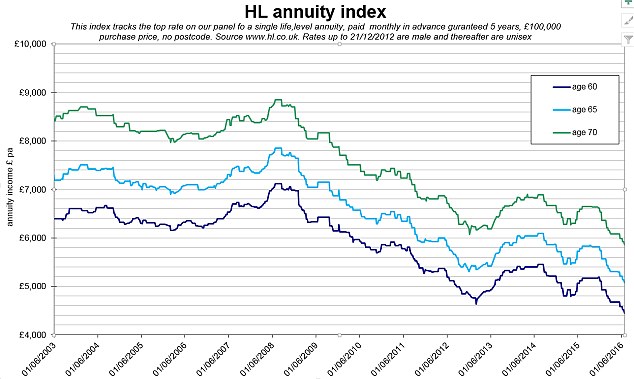 This shouldn’t come as a surprise. Pension funds are restricted in what they can invest in and what risks to take so they are very much exposed to government bonds. The graph below from thisismoney shows how annuity rates float above long dated UK government bond (gilt) prices. 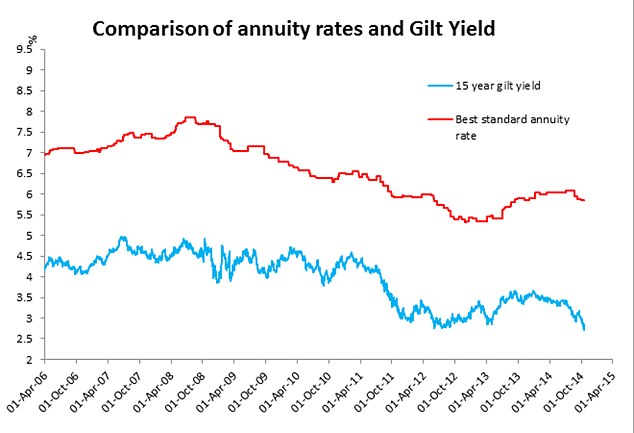 It is this steady drop in gilt yields (and if you hold them, booming prices!) that is making the cost of servicing the final salary pensions very difficult. In the past many companies offered them – but that’s largely over now. Even my old company has closed its final salary pension for new joiners and it might even close it for current employees too I’m told. The cost of a guaranteed income for life (from age 60) is very high – especially in the face of a perfect storm of rising longevity and falling gilt yield. 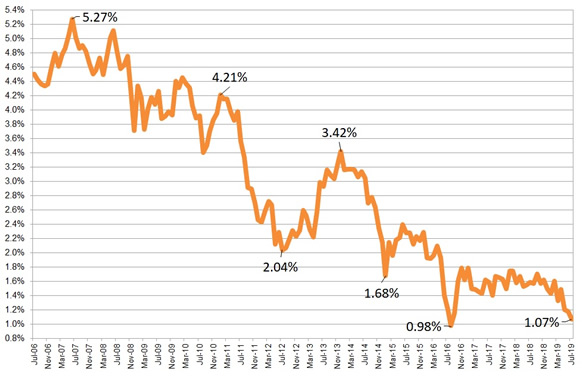 I am not alone

My final salary pension is relatively modest. I never earned mega bucks at the old company and I’m sure that there are many people who will retire at age 60 with maybe £100,000 per year – I once tried to see what the average pension fund was in the company but it was hard to access the figures. But it’s safe to say that if you were lucky and had a final salary pension and finished working with a high salary you could easily hit your lifetime allowance on your pension.

The lifetime allowance is a funny limitation on pension funds. I won’t get into it – but if you have the privilege of holding more than a million pounds in your pension funds then you might end up on the wrong end of punitive tax charges. £1m is equivalent to £50,000 a year from your pension provider but if you choose to transfer out a £25,000 pension and get a 40x CETV rate then you will easily hit that £1m. Throw in any SIPP, AVCs, other pensions add on a couple of years of compounded growth and you could easily be above the lifetime allowance.

Choices, choices, choices. I once thought that my pension was a set and forget account. I don’t have to watch it, manage it, measure it, track it or worry about it. I’d get it when I turn 60 and it’s part of my FIRE plan for then. Having it means that I don’t have to worry so much about my 60s – my focus right now is on how to survive the next 20 or so years to 60.

I’m not sure if I’ll cash out the old pension and go balls deep into equities. I’d appreciate any thoughts on the matter from other people. I’ll write more about how to blend a final salary pension into our pension planning in Part 3.

Shelter from the Storm