GFF is not a fan of fad diets and overly healthy living but I was very worried by something that I read today that in Northern Ireland diabetes cases are up 70% in 12 years and now affects about 5% of the population there.  It’s the same everywhere and there’s not much point in Financial Independence if you have Insulin Dependence!

Whilst GFF was a topclass sportsman in his youth, more recently I’ve become overwieght and unfit.  It seems to be the norm for a lot of people – the world of working in an office means you don’t get much exercise driving to work, sitting at your desk, munching you lunch, sitting back your desk, driving home or at home when you are mentally knackered from your day in the office.

Bad habits creep in too – you start to make bad food choices.  Some people talk about the Latte factor as a way to easily save £100 a month.  But it’s the cheesecake that goes along with the latte that is the real problem.  I try to eat healthily but I’m as guilty as half the population are – blame the office job?

What’s the alternative to becoming an office droid with saggy man boobs, a big belly and getting out of breath just walking up a few stairs?  Well, there’s no shortage of sure fire, get fit quick schemes out there just waiting for you.

My (over-sized) gut-feeling is that getting overly excited about the latest health craze is that you are just falling into the marketers trap.  Inevitably free solutions will not be promoted as much as something that involves buying overpriced food supplements, signing up, paying a fee, buying equipment or having a personal coach. It’s an industry that is worth billions worldwide. GFF’s problem is that I have is that I’m tight with money and very suspicious of anything that is has unfounded health benefits promoted by idiots (including quality UK Newspapers) and too smart to fall for MLM scams/schemes.  In general, GFF is against consumerism and when it comes to health:

Also, it’s easier being unfit and unhealthy. It’s a case of a moment on the lips a lifetime on the hips for me – it’ll take years for any of the chronic health problems to creep up on me?

Back to the point, I’m going to try to come at diabetes at a different angle.  I’m not going to try to scare you but tell you about what I think about it and how I will hopefully amend my behaviour.

From the NHS: Diabetes is a lifelong condition that causes a person’s blood sugar level to become too high.

There are 2 main types of diabetes:

Type 2 diabetes is far more common than type 1. In the UK, around 90% of all adults with diabetes have type 2. Generally you can’t “get” type 1 diabetes but you can get type 2 and it is this rise in type 2 diabetes that is concerning – particularly for anyone with a desk-based office job.

Background to the Diabetes Epidemic 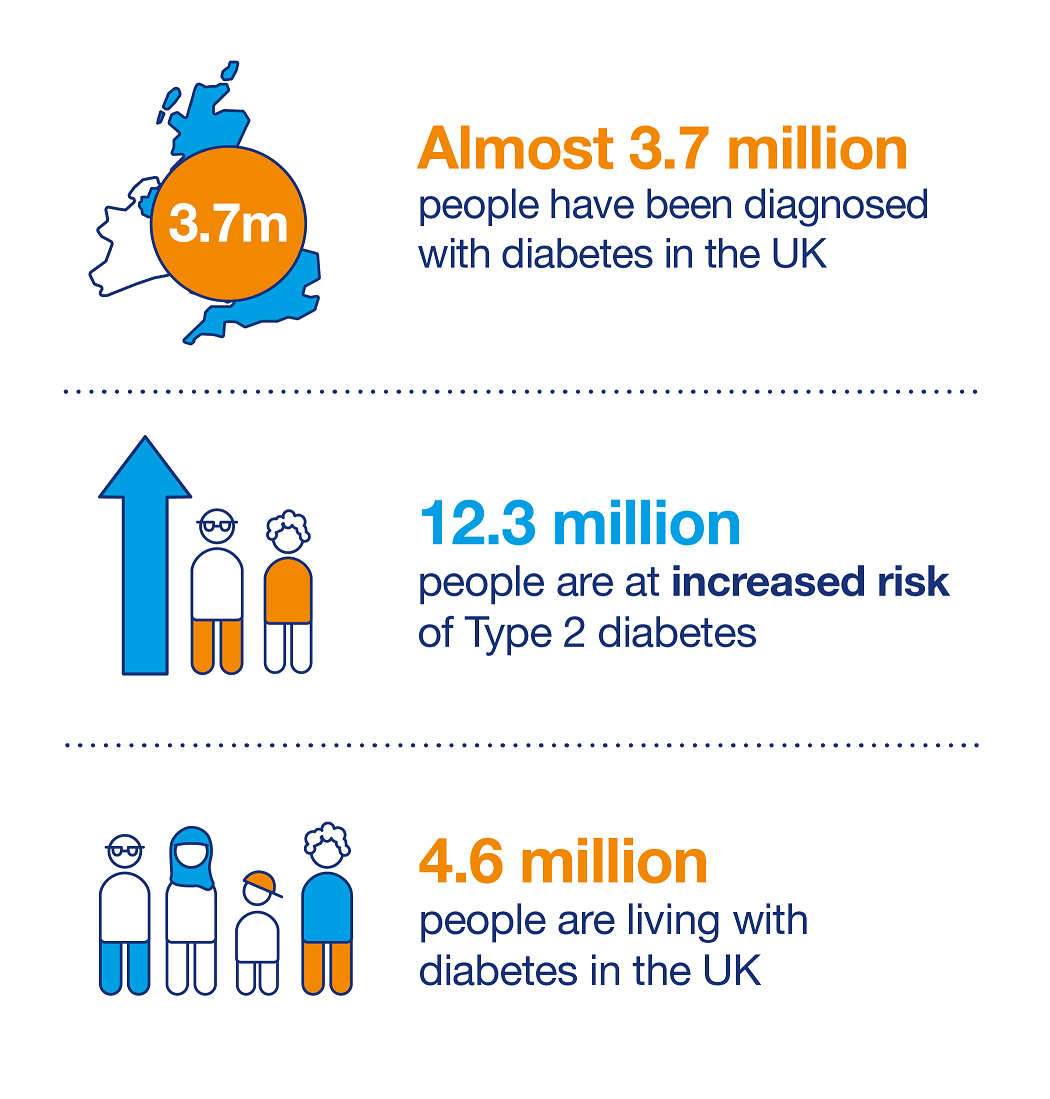 More information can be found from the NHS.

Diabetes is a terrible disease and can affect suffers for a lifetime.  It can lead to a whole host of medical problems and complications.

There are a number of major risk factors for type 2 diabetes. Although some diabetic risks come from your genetics, many are preventable. GFF doesn’t have much history of diabetes in his family and neither does the lady.  Some ethnicities are very susecptible to diabetes – particularly South Asians.

Unfortunately, many people do not know what these are or clearly understand the signs of them. For this reason, below is a list of top type 2 diabetes risk factors.

Obesity is the major type 2 diabetes risk, with millions of people throughout the world facing obesity. Almost a quarter of adults in the UK are recorded as being obese.

Furthermore, the numbers continue to climb, both amongst adults and children.

The number of children being diagnosed with type 2 diabetes caused by obesity is climbing everywhere. In the UK, about one in three children are classed as obese.

Lack of exercise and sedentary way of life

Living a sedentary lifestyle without sufficient exercise is seriously damaging to health. Being inactive often leads to being overweight, which can lead to pre-diabetes and type 2 diabetes. Staying active decreases insulin resistance and helps bodily insulin to be more effective.

GFF tries to get as much exercise as possible but it’s not always possible with a family and I’ve made other choices.  I do try to exercise when I travel and at the weekends but I don’t go to the gym right now.  Maybe I should try to incorporate that into my schedule?

A so called Western diet, with a reliance on processed foods, poor quality fats and little fibre content, is thought to be a major contributor to diabetes and metabolic syndrome.

Now, GFF is a great fan of fresh fruit and veg.  I’m also a fan of fibrous foods – especially berries.  I try to eat well but don’t always manage it – especially when travelling.

Now this does not look good for GFF – I’m overweight, not quite obese but I was asked if I was a 34 inch waist this week (I’m 32 thank you very much but I am testing the upper limits) and I do eat a Western Diet (although we go try to eat well and cook from scratch).

Tick, tick tick – I’m at a higher risk of getting diabetes!Wealth is Health

So goes the old saying.  The cost of diabetes to the NHS is £14 billion a year.  That’s the what it costs the NHS, if you get diabetes it can lead you to have your limbs amputated!  What price would you put on your legs?  I’m certainly swap my LISA for my Legs any day.

The causes of diabetes are well known but the societal factors that go into it are in my opinion even more intriguing.  How come less well-off people are more likely to get diabetes?  What do they do differently that makes them susceptible (not only to diabetes but any number of health problems).  Some of these are sort of first world problems.  But there is an epidemic in the UK of people and worryingly children becoming less and less healthy.

Wealth is not health if by being poorer you have a great risk of developing long term illnesses like diabetes.  The amount of effort that is put into schools to teach kids the right way to live (that’s to eat & exercise) is great but parents let their own kids down.  Recently at a trip to a softplay centre, GFF went to the café for some food.  There was no fruit at all (I love apples) but any number of sweets and chocolates, sugary drinks and things that are in general mostly sugar, to be eaten only in moderation and should probably be displayed like cigarettes are now.  The Sugar tax is a step in the right direction but not far enough!

In the race to early retirement, there are many FIREes who might think that it’s worth sacrificing their health (mental or physical) in the pursuit of  the money to buy their financial freedom.  I’m thinking along those lines.  I think that the increased risk that I have is a trade-off for earning more, saving more and potentially retiring earlier.

Now, of course that’s a great excuse for me to not do anything.  But if I knew now that in 10 years I’d be diabetic, what would I do differently and how soon would I do it?  It goes for any number of health complaints.  Stress comes with a lot of jobs – especially if you want to succeed.  But stress is a killer.  When you combine a stressful job with skipping meals, eating on the go and sugary/fatty food (like chocolate bars, sugar in your tea, fat coke) you are endangering yourself.

So all Lent this year, GFF has been avoiding sugar like the plague.  I’ve also gone on a bit of a digital detox but the sugar diet is even harder.  One exception is for homemade deserts like cakes or scones.  Cooking with the little Master is fun and he’s learning a lot.

The Lady is a sugar addict and seems to eat like a sparrow at dinner but devours a packet of jaffa cakes like a hungry seagull.  Getting out of the habit of eating sweets is difficult but that’s what Lent is all about.

The results are sort of beginning to show.  I’ve lost 1kg since lent started 3 weeks ago and I feel that I’m over the cold-turkey phase and getting my blood sugar levels under natural control.

It’s one thing to say that X% of people are overweight.  Sure, half the population are above average anything.  But when you think that the everyday choices you make and the way that you live your life could mean that instead of just being a conceptual overweight mean that you will get or have diabetes, it makes you take stock of the situation.

IF GFF is planning to Retire Early, I should at least plan to Retire Long and not just Retire into an Early Grave.  So, hopefully once Easter comes, I’ll still be avoiding sugar and with these longer days, getting a bit more exercise to stop me being so sedentary.

NI rise and what it means for the FIRE movement