How to put out a FIRE? Use Liquidity

Recently our plans for FIRE took a slight turn for the worse.  It’s a reminder that paper profits can flatter your balance sheet but when the SHTF it’s all smoke and mirrors. The importance of liquidity is hard to ignore.

Anything which has a value which depends on the whims of individual buyers is a risk.  Think fine wines, classic cars, private shares, property, antiques, stamps.

You could have just invested in a FIRE extinguisher!

I made an investment in an equity raise in a beer company in 2011.  I liked the company at the time and I had the spare money so invest.  Fast forward a few years and the company is valued at around a billion pounds and my shares have jumped in value.  I sold a portion in 2016 up to the capital gains tax limit taking profits.  More recently the company continued to grow in value and they were raising capital again pricing the company at 40 times what I originally paid.  On paper, I was sitting on a small goal mine. 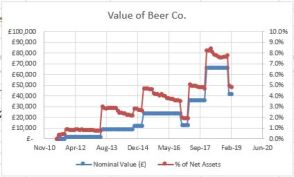 The graph shows how my shareholding has changed over time – peaking at over £60,000 or 8% of net assets.  That’s a significant portion of our FIRE assets.  Understandably we’ve been trying to reduce our exposure but trading is limited in this company and whilst buying shares is relatively easy, selling is a bit trickier with only 3 trading days having taken place.  Roughly once a year.

There was a trading day at the end of January and the final trading price was about 30% lower than what the shares were for sale just recently.  Fair enough, there are a number of owners who like me are potentially sitting on large gains and would rather pay off the mortgage, or do something else with the money.

This drop in value actually means about a 3% reduction in our Net Assets – but more importantly; I was planning to sell some shares (up to the CGT limit) this year and invest in ETFs instead, but I didn’t sell.  I still own a number of shares but whilst there is a line in my expenses spreadsheet that says that I have £40k in shares, I can’t sell (or buy) shares in the company and that’s a real concern.

Maybe I should have sold at the trade price.  It was about 30 times what my original investment was – still very good profit and a beer in the hand is worth two in the fridge.

The company has done well and is still growing.  There are plans to float in the future and some estimations of the value of the company indicate that the “fair” value might be twice (or more) of what the recent trade prices are.  Floating may happen in a couple of years time – that’s undecided.  Potentially with a FTSE250 listing, the shares gain liquidity (and maybe jump in value? – that would be nice).

By comparison, a company like Fevertree is valued at over £3 billion pounds.  It has a P/E of over 60.  Beer company might make carbonated beverages but its price right now is not as frothy as that.

So, now we’ve got a bit of a problem:  if we decide to FIRE, we plan to use a combination of funds to provide the cashflow to live off (dividends, VCT sales, P2P lending, cash/savings balances, beer co. sales).  Having money tied up in the beer company means that there’s a risk that our paper profits go up in smoke.  No FIRE without some smoke and having a significant proportion of our wealth in one illiquid share is not ideal.  I don’t even drink beer anymore and if did have a beer it would be a delicious Belgian beer not a British craft beer – as good as craft is, I’m a Belgian beer fan through and through (slice my liver and you’ll see that it’s black, yellow & red through and through

So, that’s it.  An investment that’s already paid off for me – I’ve made back my original investment already.  I’m not upset about the price dropping, it’s paper profits but I am a bit upset that I don’t have the money in the bank now to invest in dividend paying ETFs like I had planned.  It also introduces more risk to our finances than I would like.  It’s in part like people wiser than me have said – get rich once.

We are the Jonses!

Sorry, I Called the Bubble Burst on Tesla Too Quickly!