One of the Fringe benefits of living where we do is being 1 hour from the City of Edinburgh.

And Edinburgh, Scotland must be one of the world’s most amazing cities to live in.  It’s a place that I would dearly love to live in for a number of reasons including: the people, the atmosphere, arts, culture, events, the city itself – which is beautiful.  There are also lots of well paid jobs and well heeled people living in Edinburgh.  No wonder people want to love to Edinburgh.

The first experience a lot of people get of Edinburgh is from the Edinburgh Festival and Edinburgh Fringe which was the case for me back 10+ years go.  The City itself holds festivals all year round – focused on August and Hogmanay (Scottish New Year’s Eve).

Anyway, last weekend GFF, the Lady and the Master all headed off to Edinburgh for the day.  We had tickets to the hottest gig in town.  Some shows sell out in minutes at big festivals like this – and we had managed to get tickets for a 1 morning only show of Nick Cope!!!  Unbelievable.

We met up with some friends with kids and had a great time at the show listening to some classics and new material.  The show went down a storm and I think that everyone enjoyed themselves.  We had front row seats and were really close to the action!  The kids were all really enjoying the music or just running around being kids and trying to knock over the speakers and climbing on chairs.  Hey – it’s the festival, you have the freedom to do what you like!

If you don’t know Nick Cope, he sings kids songs that everyone will like – I’m also told that he does children’s parties for well behaved children.  Check him out if you can.  We even got an autographed book from Nick and I managed to take a snap of him setting up. 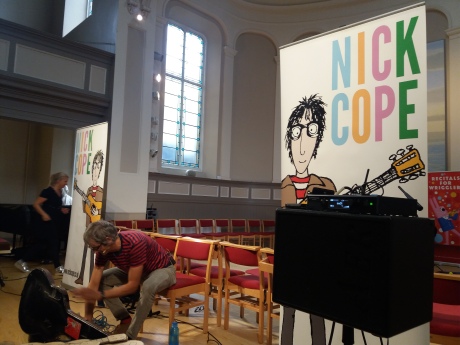 After the show we went for lunch and enjoyed the mood in Edinburgh’s Stockbridge.  Stockbridge is a great place to visit – but a bit prohibitive to live in!  And people know how expensive it is!

After, we went to Edinburgh Book Festival which was a bit of a change from the drink fueled mayhem of my previous festivals.  It was great to see so many different people and we managed to buy some great books for the Master which he’ll love.  It was good to relax a bit at the festival.  Parents need that sometimes. 🙂

Ms ZiYou wrote recently about the Festival and again on freedom, as did I.  I think that cultural health is just as important as financial health and physical health.  You need to elevate yourself and you mind sometimes and Edinburgh is place to do it.

I would recommend that you visit Edinburgh at any time of year, but the Edinburgh festivals only run until Monday 27th of August.  Which means you have maybe missed it for this year.  There’s always next year and since there is a Financial Independence Edinburgh Facebook group – maybe they could organise a meet-up next August (A FIRE Fringe maybe?).

In summary, the whole day  was a success.  Fun, entertainment, catching up with friends and buying some books for the Master to read.  Edinburgh in August is on the list of places to always come back to.  Are there any other festivals that you can think of which are good to go to for all the family?  Let me know and who knows, we might see you there next year.

A Global view on work vs. income

It’s a dirty job, Dom, but somebody’s gotta do it

Reader Question: How Do I Find an Environmental Career? — Tread Lightly, Retire Early

We’re all going on a Mortgage Holiday

The Merits of a Paid-off Mortgage?